You are here:
Publications 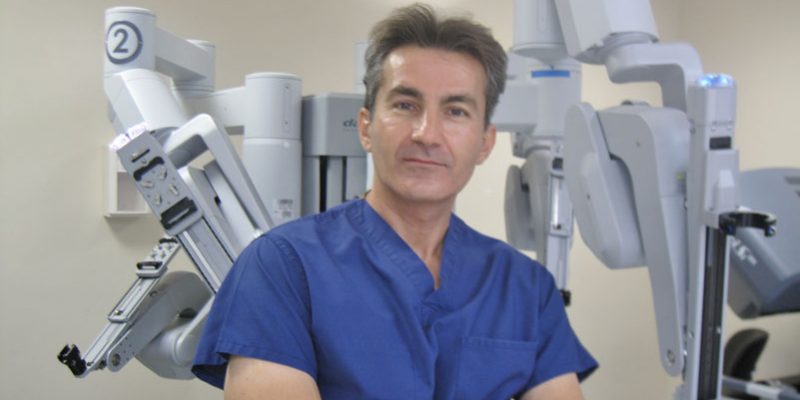 Laparoscopic TAPP inguinal hernia repair remains a technically challenging procedure requiring advanced laparoscopic skills with prolonged surgeon learning curve. The robotic system has the potential to overcome these challenges. However, due to cost and the length of operation, using robotic system primarily for inguinal hernia repair is controversial. This report describes the new modified technique to reduce the technical difficulty and length of surgery.

Twenty consecutive patients with bilateral inguinal hernias underwent robotic assisted TAPP repair with 3 D mesh. In the initial 10 cases, the operation was performed similar to the laparoscopic TAPP hernia repair. However, the technique was modified in the last 10 cases to overcome the initial challenges and decrease the length of surgery. Docking time, console time and total procedure time were recorded.

All procedures were completed robotically. The average operative time was 110 minutes (initial 10 procedures: 122.8 minutes; last 10 procedures: 97.1 minutes). There were no complications.

It was determined that the placement of patient in lithotomy position, docking the robot from the midline, modifying the ports position and placement of mesh and suture prior to the docking would improve the visualization, facilitate access to both sides of groin, minimize the robotic arms clashing and decrease the operative time substantially. Therefore, in experienced hand, robotic assisted TAPP inguinal hernia repair can be performed safely and has the potential to overcome the difficultly of this challenging procedure.

From 2001 to 2012, the author (ASI) performed over 650 laparoscopic trans-abdominal pre-peritoneal (TAPP) and total extra-peritoneal (TEP) inguinal hernia repairs and was familiar with the pitfalls and technical challenges of these methods. It was postulated that the robotic system might have the potential to overcome these technical challenges in performing the TAPP inguinal hernia repair. The potential advantages of robotic system are enhanced visualization and improved dexterity due to wristed instruments. The safety of TAPP hernia repair during robotic prostatectomy has been described in the past. (5)Therefore, from September 2012 to August 2013, the author performed 20 cases of robotic assisted TAPP bilateral inguinal hernia repair to evaluate the safety, feasibility and reproducibility of using robotic system in performing this procedure. The technique went through many changes and refinements to standardize the procedure with robotic system and decrease the operative time. This report presents a description of the author`s new standardized technique.

Patient is in lithotomy position with legs in adjustable stirrups and arms are tucked alongside the body. A urinary catheter and sequential stocking are placed. A vertical incision is made above the umbilicus for 12 mm camera port. After the initial inspection, the patient is placed in 15-30 degree Trendelenburg position. The anterior superior iliac spines and mid-clavicular lines on both sides are marked. Then a straight 12-13 cm line is drawn from the supra-umbilical camera port towards the mid-clavicular lines on each sides. The intersection of these lines on each sides are the locations of the two 8 mm robotic ports. The distance from these 8 mm robotic ports from the anterior superior iliac spine should be around 12-13 cm as well. (Figure 1) This ensures the free movement of the robotic instruments during the dissection and suturing. Then the ports are placed under direct vision with scope. The Co2 is insufflated through the 8 mm robotic port for less fogging and best visualization.

Based on the patient size and the size of hernia an appropriate 3 D mesh (Bard) is chosen. It is rolled and inserted through the 12 mm port and is left inside the pelvic cavity. Using a laparoscopic needle holder through the 12 mm port a suture is also inserted into the pelvis and secure to the peritoneum for future closure of peritoneum. If there are bilateral inguinal hernias then 2 meshes and 2 sutures would be placed into the cavity. This step would eliminate un-docking the arm during the robotic hernia repair  procedure and minimizes the console time.

The patient cart is rolled into position between the patient’s legs and is locked. The camera arm and instrument arms are docked. The spacing between all instrument arms must be maximized. The camera is then inserted. Under direct vision with robotic camera, a monopolar scissors is inserted through the arm one on the right sided robotic port and bipolar fenestrated grasper through the arm 2 on the left sided robotic port.

A transverse peritoneal incision is made from the level of anterior superior iliac spine laterally to the medial umbilical ligament medially and anterior to the hernia defect. Peritoneal flap is then developed. Direct and indirect sacs are fully reduced. (Figure 2 &3) The anatomy is then defined. The dissection is carried laterally to the level of anterior superior iliac spine, medially 1-2 cm beyond the symphysis pubis, cranially 3-4 cm above the transversalis arch or any direct defect, and caudally 4-5 cm below the ileopubic tract at the level of psoas muscle and 2-3 cm below Cooper`s ligament at the level of superior arch of the pubic bone. (6) The mesh is then fashioned and placed into the pre-peritoneal pocket. (Figures 4 & 5) The medial border of the mesh is placed adjacent to the symphysis pubis and the lateral border is placed at the level of anterior superior iliac spine. The mesh must cover all potential defects in the groin region. If the hernia is bilateral, the same procedure is performed on the contra-lateral side and the second mesh is being used. The mesh does not need to be tacked to the abdominal wall to decrease the post-op pain and discomfort. At this time the arm one instrument is replaced with robotic needle holder and the peritoneum is then closed by intra-corporeal suturing technique. Then the instruments are removed and the robot is un-docked. Using the 5 mm laparoscope through the right sided robotic port, the abdominal cavity is inspected and the needle is removed from the 12 mm port. The ports are removed under the direct vision and the fascia and skin are closed.

From September 2012 to August 2013, 20 consecutive male patients with bilateral inguinal hernias underwent robotic assisted TAPP repair with 3 D mesh (Bard). The daVinci(®) Si Surgical System (Intuitive Surgical, Sunnyvale, CA) was used in all cases. Two hernias were recurrent and the rest were initial diagnosis. All procedures were completed robotically and as an outpatient basis. Docking time, console time and total procedure time were recorded. In the initial 10 cases, the operation was performed similar to the laparoscopic TAPP hernia repair. The author used side docking with two 12 mm and one 8 mm robotic ports and followed the similar technique as laparoscopic TAPP inguinal hernia repair, including ports position. However, the technique was refined later. Patient position, docking, ports position, and the time of insertion of mesh and suture were modified after the initial 10 cases to improve the visualization, facilitate access to both sides of groin, minimize the robotic arm clashing and decrease the time of operation. Three ports (12 mm, 8 mm, and 8 mm) were used, patients were placed in Lithotomy position, the robot was docked from the midline and the mesh and suture were placed prior to the docking the robot in the last 10 cases. The average operative time was 110 minutes. The average operative time in initial 10 procedures was122.8 minutes but it was improved to 97.1 minutes in last 10 procedures. The average blood loss was approximately 5 ml. There were no complications during or after the surgery.

Laparoscopic hernia repair was first described by Ger in 1990, who placed a simple mesh plug in the defect. (7) The technique has undergone significant changes during the last 20 years. Currently, there are two types of laparoscopic hernia repair; the transabdominal pre-peritoneal (TAPP) repair and the totally extra-peritoneal (TEP) repair. Several studies have demonstrated a clear advantage of laparoscopic hernia repair over open repair in terms of reduced post-operative pain and earlier return to work and normal activities. (2, 3) The laparoscopic inguinal hernia repair also offers the technical advantage in repair of bilateral and recurrent inguinal hernia. (4) Another major advantage of the laparoscopic approach is the ability to detect and repair a contralateral defect at the same operation with only a moderate increase in operating time.(8)Despite these clear advantages, the laparoscopic approach has been slow to gain popularity amongst many surgeons. This is most probably due to requirement for advanced laparoscopic surgery skills to perform this procedure, including intra-corporeal suturing, long learning curve and higher cost.

More recently, minimally invasive surgery can be performed using robotic technology with potential benefits of enhanced visualization and improved dexterity due to wristed instruments. The application, safety and feasibility of robotic surgical system for inguinal hernia repair during robotic prostatectomy has been reported in the literature. (5) The author (ASI) having performed many laparoscopic inguinal hernia repairs in the past, was familiar with the pitfalls and technical challenges of these methods especially for patients with higher BMI and larger hernias. Therefore, the author (ASI) embarked on a project to assess the safety and feasibility of integrating robotic surgical system in primary repair of inguinal hernia to overcome these technical challenges.

At the start of the robotic assisted TAPP inguinal hernia repair, the author (ASI) followed the similar technique as laparoscopic TAPP inguinal hernia repair, including ports position. The initial experiences showed the need for technical modifications to prevent the robotic arm clashing, better visualization and access to both groin sides. It was also noticed that placement of the mesh and sutures after docking would increase the time of operation significantly since it was required undocking a robotic arm to place them inside the abdomen. After the initial 10 cases the appropriate technical modifications were applied. The final technical modifications which were applied to the last 10 cases decreased the time of operation substantially and improved the visualization and access to both sides of groin and minimized the robotic arm clashing. After using the finial standardized technique (described earlier), the time of operation was comparable to the time of author’s laparoscopic approach.

Although at this time the long term follow up of these patients are not available, however, this preliminary report demonstrates the safety, feasibility and reproducibility of the robotic assisted TAPP inguinal hernia repair in selected patients and in experienced hand. The advantage of the robotic technology also allows the surgeon to offer the minimally invasive inguinal hernia repair to the patients with higher BMI and larger hernias that are technically much more challenging with laparoscopic approach.

Performing the robotic assisted TAPP inguinal hernia repair safely and efficiently requires a long learning curve. However, for surgeons with advanced laparoscopic skills and hopefully by adopting the measures outlined in this report, this learning curve would become shorter.

Although there are justifiable debates regarding the potential benefits and cost of robotic assisted inguinal hernia repair surgery, this will only be settled with additional prospective randomized controlled trials.

Conflict of Interest: None”

To make an appointment consultation with  Dr Iraniha Laparoscopic Specialist please contact Surgical Oasis Orange County Surgical Center for same day or next day appointment. Or call us at (949) 646-8444.Thank you